Oh, be still my heart! I just learned today of a project that delights me. It is called the Moby Dick Big Read, and here is written on the site’s About page:

Moby-Dick is the great American novel. But it is also the great unread American novel. Sprawling, magnificent, deliriously digressive, it stands over and above all other works of fiction, since it is barely a work of fiction itself. Rather, it is an explosive exposition of one man’s investigation into the world of the whale, and the way humans have related to it. Yet it is so much more than that. It is a representation of evil incarnate in an animal – and the utter perfidy of that notion. Of a nature transgressed and transgressive – and of one man’s demonic pursuit, a metaphorical crusade that even now is a shorthand for overweening ambition and delusion.

Out of all this, Herman Melville created a unique work of art – as unique as Mary Shelley’s Frankenstein or Emily Bronte’s Wuthering Heights, as mythic as Coleridge’s Rhyme of the Ancient Mariner – a true force of nature, set in a century that challenged every tenet of faith that had been held until then. Melville’s book – is it barely a novel – exceeds every expectation of a literary work. It bursts out of its covers with the enormity of its subject – as if the great White Whale itself were contained within.

Now, in the 21st Century, a century and a half since it was first conceived and launched onto a misbelieving world, Moby-Dick retains its power – precisely because we are still coming to terms with it, and what it said. Incredibly prophetic, it foresaw so many of the aspects of the modern world with which we deal with. The abuse of power and belief; of nature and the environment; of the human spirit. It deals with art and artifice and stark reality – in an almost existential manner. It is truly a book before its time – almost ancient myth, as much as futuristic prophesy.

In the spring of 2011, artist Angela Cockayne and writer Philip Hoare convened and curated a unique whale symposium and exhibition at Peninsula Arts, the dedicated contemporary art space at Plymouth University, under the title, Dominion. Inspired by their mutual obsession with Moby-Dick and with the overarching subject of the whale, they invited artists, writers, musicians, scientists and academics to respond to the theme. The result was an enthusiastic response which evidently could not be contained within the physical restrictions of a gallery space and a three-day symposium.

‘I have written a blasphemous book’, said Melville when his novel was first published in 1851, ‘and I feel as spotless as the lamb’. Deeply subversive, in almost every way imaginable, Moby-Dick is a virtual, alternative bible – and as such, ripe for reinterpretation in this new world of new media. Out of Dominion was born its bastard child – or perhaps its immaculate conception – the Moby-Dick Big Read: an online version of Melville’s magisterial tome: each of its 135 chapters read out aloud, by a mixture of the celebrated and the unknown, to be broadcast online in a sequence of 135 downloads, publicly and freely accessible.

My favorite book. A book I will happily reread time and again, and discuss with whomever, whenever. It is a book about mankind and nature, about the God-filled and the godless, about human interaction and brotherhood, and all about whales. “Call me Ishmael.” Why Ishmael? Why that name exactly? The moment I first asked that question, and set about finding an answer, I became a student of literature. I had always loved books, but Melville opened a new world to me. Where once I read, I now devour.

If you haven’t read this book, listen to it now. Free access! There is no excuse not to step into the labyrinth. 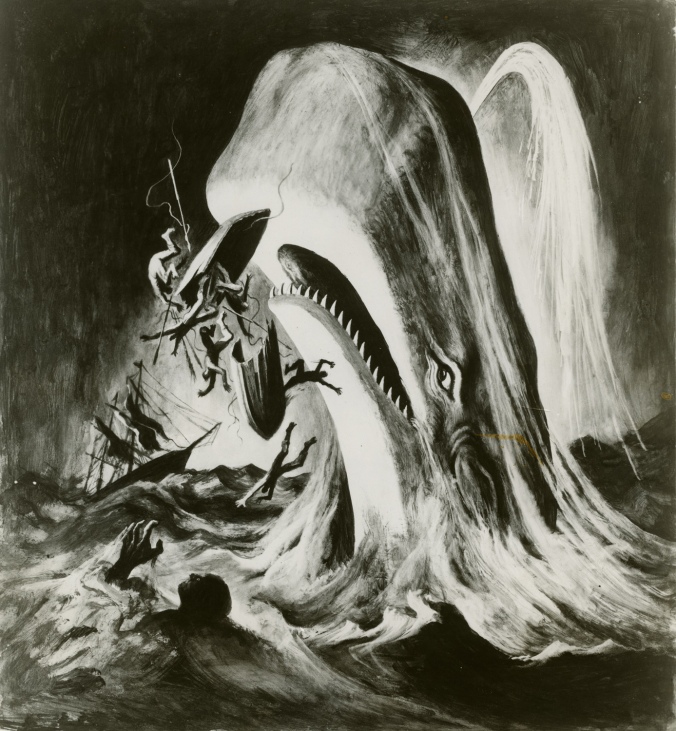